BREAD on MONDAY - Homemade Bread, No Matter What! 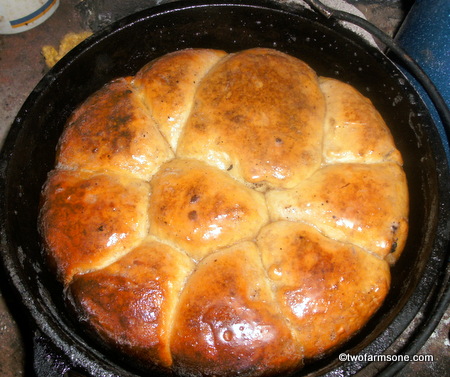 A few months ago, my electric oven finally bit the dust. It completely went out, frying and sizzling as it died. The broiler part broke quite a long while back, but a few months back, the rest of it broke. Actually, I might have added to it. I was trying to "fix" it, when it finished breaking. It wasn't working right, though, that was for sure, because once it completely broke, my electric bill really dropped! So its breaking was probably a blessing in disguise.

I can't afford a new stove/oven right now (stove top broke years ago), so I have been playing around with alternative cooking methods. There really are quite a few of them, you know? We should never get so dependent on one cooking method that we don't know any other way to cook. We should always know how to use several options, for whatever reason we might need them.

I love my homemade breads, and I have been using a bread machine to make them, since my oven was broken. I have more than one bread machine, but I have been using my favorite, which is also my biggest one. One day, recently, I had it going and just a few minutes into its initial mixing/kneading cycle, I heard a really strange noise coming from it. I went to check and my favorite bread machine had broken!!! *cry - sniff* My other bread machine is considerably smaller, and I just did not feel like dragging it out of the closet, switching them around, and trying to start the cycle all over, plus it wouldn't have all fit into that machine.

So what did I decide to do? Well, I had had a nice fire going in my wood stove all day (with which I heat my house), and it was getting down to some really good coals, so I decided to cook my bread in there. I dumped the dough out onto a floured platter, kneaded it by hand, pinched it off into hot rolls, and placed them into a well oiled 2-quart cast iron Dutch oven. By the time they had risen to more than doubled, the coals in the wood stove were just right for baking.

I cleared out a space in the middle of the coals (if they are too close, they will quickly burn what you are cooking), placed the covered Dutch oven in the cleared out space, and in no time I had light, moist and delicious hot rolls ready! As soon as I pulled them out of the "oven" I thoroughly rubbed a stick of butter over them. They were crispy, crunchy on the very outside, and so light and fluffy on the inside. The were fantastic!!! I will definitely be doing this again.
And as an added plus, it didn't cost anything for utilities (electric) to bake this batch of bread because I already had the wood stove going to heat the house, with wood that came off of my property and my fiance had cut. So now, while it is cold, I am doing almost all of my cooking in that old wood stove and loving it! I love the food, and I love the reduced electric bill.
This should work with any Basic White Bread recipe. Just remember to shorten the baking time.

Posted by GrannyAnnie at 8:50 PM

Be sure and visit our main site at twofarmsone.com